I recently stumbled upon Empire Magazine‘s list of the 500 Greatest films of all time. Naturally, a list like this is made to start conversation, debate, and sometimes, a fight. We all have our idiosyncrasies when it comes to movies, and like a song or place, the context in which we fell in love with a particular picture biases our opinion. That being said, I’m not claiming Empire Magazine is wrong, they most certainly aren’t right because there is no correct list, but they really dropped the ball on a few movies. Of course Annie Hall is going to be on there, but no Hannah and Her Sisters ? Even Woody Allen claims that’s his best film. No Blow-Up? That’s just blasphemous. Anyways, I could go on for a long while, but here’s one that may not be as obvious. Italians are well represented on Empire’s list, but somehow they overlooked this substantial example of early independent filmmaking.

“I’m a Volcano of Ideas” – Alessandro

Fists in the Pocket (1965), directed and written by Marco Bellocchio, is a bizarre, yet beautiful film, dealing with the destruction of family, bourgeois values, mental health, and oddly enough, altruism. Though the film takes place in rural Italy, in a decaying estate surrounded by mountains, it never loses its claustrophobia. Ale (Lou Castel), the protagonist, is obviously troubled by his situation. His family is wrought by hereditary disease, living in a bizarre, bourgeois fantasy that they all seem unaware of (hence the mother’s blindness). Ale takes it on himself to relieve his family of their own suffering by ending their lives. Consequently, catholic guilt comes into play as the morality of his “altruism” is questioned. 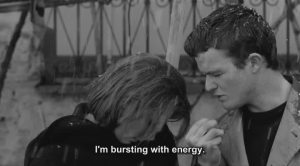 Not to give away too much of the plot, since this isn’t a review, I urge you to watch it. As depressing as it sounds (some have even placed it in the horror drama) it still has its moments of sincerity and heart. Much of this is due to the camera work, which masterfully (despite it being the director’s debut) captures the estate as a character, or at least, a canvas on which its inhabitants project their emotions. Mind you, this is an Italian film from the mid-sixties, so there’s the risk of over-doing the “artsy” cinematography, but, all in all, I find Bellochio avoids this pretentious fate. In other words, all of his shots, movements, and compositions seem genuine.

I’m not commenting on the destruction of the bourgoius family, or any of the political implications because, though they are there, it really is something best understood by an Italian living in that time. According to IMDB, the director actually borrowed money from his own family to make the movie, which is quite odd once you see the content. I find what makes this movie important is how it captures its characters . Deborah Young describes it, “Remarkably, Bellocchio manages to give each of these freakish characters a point of view with which we can sympathize.” As I mentioned before, it’s a movie with a lot of heart, even if it does deal with familial murder. One scene in particular, framing Ale and his sister, Giulia embracing in front of a fire (pictured above) captures this brilliantly.

One final reason to watch this movie is the ethereal Paolo Pitagora, who plays Giulia. On top of her convincing performance, she just looks beautiful in black-and-white.