For Your Consideration – Four Documentaries Streaming on Netflix 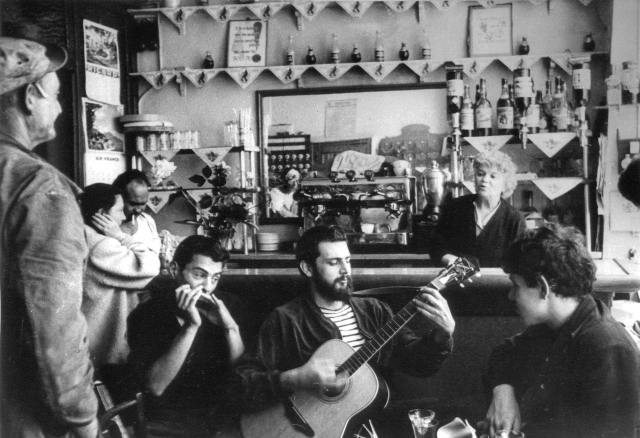 “A sanctuary of creativity,” the beat motel was more than a rundown Paris hostel – it personified a generation of artist. Dirty, eclectic, romantic, and swarming with great minds, the beat motel gave refuge to young Ginsberg, Burroughs, Chapman, and many more artists crazy on the notion they could change the world. Utilizing incredible photographs from Chapman’s stint at the no-name hotel, the doc reveals a unique chapter in art history. It’s shocking, funny, gross, and sometimes unfocused, but, then again, so was the beat generation. Highly recommend this one for those who chose to Howl.

How to Make a Book with Steidl

I have a deep fascination with watching great masters work their trade. The years of mistakes, triumphs, tedious laboring, can be sensed in every move they make. Gerhard Steidl is one of those people, and the wait list for his services speaks for itself. The documentary follows Steidl as he meticulously, with the omnipresent nagging suggestions of the client, handcrafts editions of their work. In addition to the jet-setting, he knows a wealth of famous, important figureheads, which is enough reason to watch this doc.

A Model For Matisse

Director Barbara F. Freed brings us a light documentary examining the relationship between Henri Matisse and his nurse Jacques-Marie. This is more of a story of inspiration than love. Unquestionably, these two loved each other, mind you, a platonic love – at one point in the doc it is revealed she loved him as she would love a Grandfather. The true significance of their charming story is the ability for a friend to inspire art. Matisse was immensely sick when a young Jacques-Marie, unknowing of his fame, took the job as his nurse. As the two grew as friends, their artistic endeavors flourished. Matisse as the master, Jacques-Marie as the student/muse. It was a friendship founded in concrete. Neither the war nor Jacques-Marie acceptance into a Dominican Sisterhood could fade the broad strokes of their allegiance to one another. The greatest aspect, in my opinion, is the interview with the aged Jacques-Marie. Destroying any stereotype of the stoic, intimidating nun, Jacques-Marie smiles, cries, and laughs as she remembers her iconic friend.

I like wine. I like to drink it, smell it, and spill it on my white shirt. Am I a connoisseur? Not quite, in fact, I couldn’t properly spell that word without the assistance of WordPress. So who are all these people pairing our wines? When you randomly grab the Cabernet from the overwhelming selection at Pavillions, you most likely don’t take the description on the back of the bottle wholeheartedly. Chocolate, burnt sage, blackberries, and a hint of overripe cantaloupe. After watching Somm, directed by Jason Wise, I fully realized how absolutely insane you’d have to be to want hold the title of Master Sommelier.  To illustrate, these brave few men must endure endless hours of smelling and tasting wine, only to spit it out in a disgusting concoction of spit, wine, and pretentiousness. The thing was, I couldn’t stop watching. Listening to the M.S. hopefuls vomit adjectives and nouns as if they were in some sort of a trance was funny. Maybe I’m missing the point, and, hopefully, I’m not demeaning the profession, but the whole thing is silly– silly enough to watch the whole damn movie.

My name is Jay Jasinski and I'm a freelance social media and content marketer based in Los Angeles, California. I'm also a writer with an interest in film, literature, and the environment.
View all posts by jayjasinski10 →
This entry was posted in movies, Uncategorized and tagged allenginsberg, art, beatgeneration, documentaries, film, Henri Matisse, matisse, movie, movies, netflix, wine. Bookmark the permalink.