Sometimes Everything Shakes in California

Last night, March 17th, at precisely six-twenty in the A.M, I received my rudest awakening to date. Now, let me give this statement some context. My stock of rude awakenings spans the gamut. For example, until this unfortunate event the most terrifying of the lot took place my sophomore year in college. 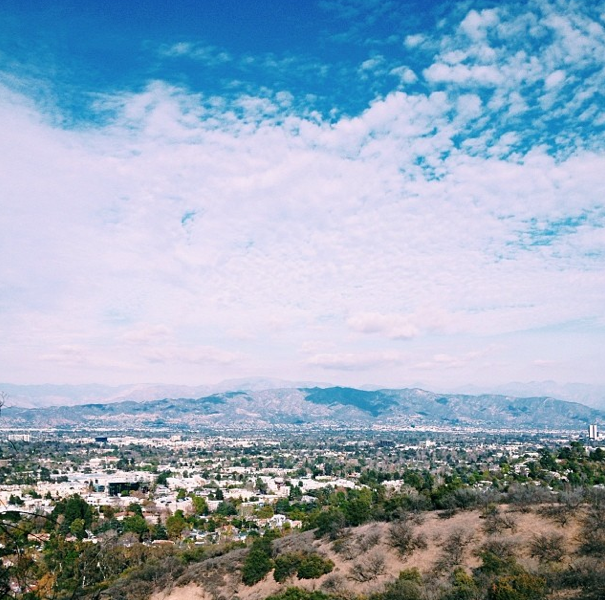 Earthquake simulation: look at this picture while shaking your computer

From what I can recall, a large explosion occurred no more than three feet from my dorm room window. In a terror never before experienced, my roommate and I instantly sat up in our respective beds. It was one of those rare instances when you’re not sure if you’re still a member of the sentient world, or in some strange transitional space between life and the afterlife.

I can’t remember if I ever found out what really happened. Surely, it wasn’t a bomb. There would’ve been fire and smoke and everything else that comes with a bomb. Thunder. That’s it, it was a burst of thunder. Anyways, what occurred last night was infinitely more traumatizing.

Quality speaking, it was a lousy night to begin with. I had been lying awake for hours, expecting that sweet slumber never to come. In an attempt to “have another go at it” I moved to the chair at the end of my bed, hoping a new location would persuade my mind to shut up and go to sleep. It must have worked, because the next thing I remember was waking up in absolute confusion. 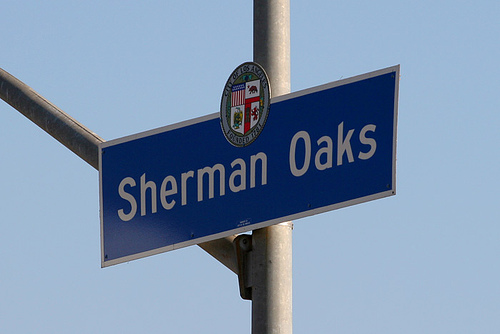 Surprisingly, the best way I can describe it is by likening it to a cheaply made movie. If you had to film an earthquake scene, and you had no budget, you’d most likely just shake the camera while the actors faked their imbalance. Visually, the structure of my room was shaking in a way not unlike the shaking of a camera. I uttered a frantic “holy” and held onto either side of my chair. It didn’t take long to come to the conclusion I was experiencing my first earthquake. Knowing that didn’t help my panic, for I hadn’t the slightest idea what the protocol was in the event of a quake.

My next reaction was to place a feather pillow over my head. The idea was that in the event of the ceiling collapsing, the pillow would soften the blow of the tons of cement, plaster, and neighbors that would come crashing down onto my skull. The shakes lasted for forty seconds, which is a long time when you’re in such a situation. Next, I rose from my chair and went to see if my roommate had been less fortunate. He was fine. In fact, everything was fine. Nothing fell from the walls, no glass shattered, and no neighbors landed on my head. With the cold eyes of death no longer upon us, we turned on the television. Turns out a 4.4 earthquake had struck incredibly close to where we were sleeping.

In retrospect, I may have elaborated my own plight. It’s difficult to determine the severity of an earthquake when you’re from Michigan. People seemed to go about their days as if it didn’t happen, so I tried to do the same. Just as a precaution, I’m having a seat-belt installed on my bed, and will be wearing a helmet at all times of the day. 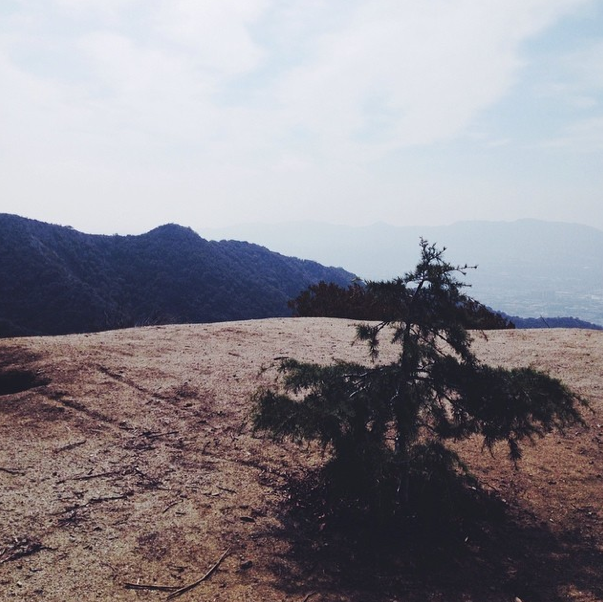 One final thing. As I write this from Starbucks, I can’t help but notice the small dog uncomfortably trapped under a table between its owner and its owner’s friend. As they go on and on about NATO and other things they most likely know little about, the dog seems entranced by a brown napkin.

As the napkin sways at the mercy of the breeze, its eyes attentively follow. I bring this up because the dog looks so sad and defeated. Quite frankly, it looks about as dumb as I imagine it feels. I’m not a dog guy, but I do believe they mean well. Unfortunately, this one has reached some sort of a breaking point. The whole set-up must be so unnatural and strange. It’s as if, at the site of the napkin, it’s realizing that it will never understand why any of the things that happen to it happen, and why it must sit under a table with a leash around its neck while its owner talks about NATO.

Amarillo, Texas: The Asshole of America

It’s been a grueling four hours of driving. I don’t know the exact moment when everything outside of our windows became uninteresting, but what I do know is that the panhandle of Texas is hell to look at. It seems like I’m viewing the same ten seconds of scenery on an infinite loop, like they do in cartoons to save money. Further, nothing has made me crave red meat less than seeing the flat miles of dirt in which cattle “roam.” It looks spoiled and unhealthy.

The only thing breaking the monotony is the occasional billboard. Let me get one thing straight, billboards in the south are unapologetic in their political incorrectness. Here’s two examples of such billboard insanity:

“Marriage = One Man + One Woman. Confused? Ask God” – That’s all it said, which was odd since it was for a recycling company.

“Catholicism: Our Greatest Hope Against Socialism” – This one had an unpleasant picture of pope Francis.

“Do these people have something against trees? No really, if they planted a shitload of trees it would protect them from windstorms and drop the temperature… Look at that cute cow standing there all alone” said lee.

Maybe he’s right. Maybe these people really do hate trees. Perhaps trees are one step closer to socialism. You don’t see any trees at the Vatican. 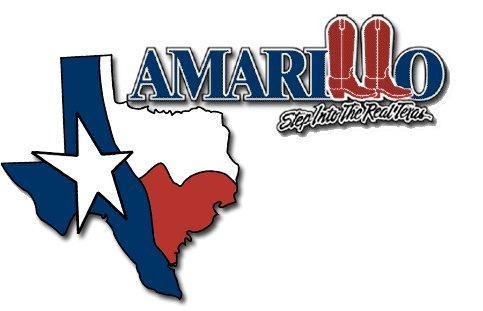 After miles of cows and dirt, we finally make it to Amarillo. I won’t lie, I had this romantic notion that Amarillo would be quite the experience. I imagined myself drinking whiskey at a saloon and chatting up some of those Texan women you hear so much about – to be honest, I can only imagine a bunch of Peggy Hills, but you get my point. The notion quickly fades as I realize Amarillo has suffered the same fate many other American cities have suffered over the years.

It’s difficult to put this in words, but our country, particularly in these smaller cities along our great highways, has become sick with sameness. Being a Midwest boy, traveling hours and hours to end up in a place you expect to be authentic in its imperfections, uniqueness, and charm, only to find the same thing you could’ve found five minutes from home, is quite depressing.

I’m in Texas, yet all I see are the same chain restaurants, hotels, and gas stations I found in the last town. It’s depressing as hell. Maybe I’m sentimentalizing the past, but I doubt the thrill in hitchhiking, biking, or driving across America was in the fact you were guaranteed a blooming onion and a flat Drury Inn pillow at every stop. 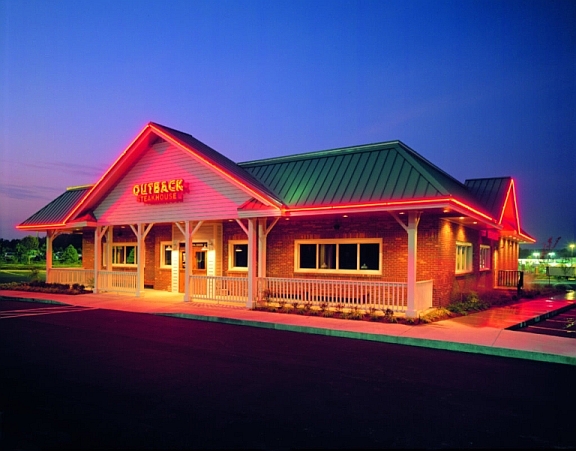 After a lousy meal at a chain Mexican restaurant, which was smartly located in the parking lot of our hotel,  Lee and I decide to drive around the downtown area. Like the flat Corona I had with dinner, the mostly vacant buildings left a sour taste in my mouth. There’s no denying the glowing strip of corporate convenience down the street has been draining this town of its economic and cultural health for years. How could the mom & pop eatery compete with the  Olive Garden right off the exit?

Maybe this is how we feel like one country. As sad as it may sound, we need familiarity for the union to thrive. As a result, we’re turning our nation into one prodigious parking lot. Yes, we still have choices: Red Roof Inns, Red Lobsters, Hiltons, T.G.I Fridays, perhaps a Steak n’ Shake if you’re somewhere exotic – but are our only needs shelter and food?

With that I ask, is it worth it? At this moment, as I write at the same desk I’ve written on at the last three Drury Inns, I can’t help but feel disappointed. Undoubtedly, there are still things to see, characters to meet, but it’s fading fast. Soon we won’t even call it a trip, just moving. Moving from our Honda Accords to the road, to the parking lot, to the same hotel, to the same restaurants; never learning anything, only moving.

“If Texas ever secedes, then good luck to them with Amarillo.” – Lee

My name is Jay Jasinski and I'm a freelance social media and content marketer based in Los Angeles, California. I'm also a writer with an interest in film, literature, and the environment.
View all posts by jayjasinski10 →
This entry was posted in Travel, Uncategorized and tagged America, los angeles, movie, road trip, Sherman Oaks, Texas, travel. Bookmark the permalink.