“Guess there’s some justice in the world. You suffer, you go through hell. Then happiness comes along or everyone.” – Maria ‘Cabiria’ Ceccarelli

Story: An isolated prostitute dances, fights, and loves her way through the streets of Rome in search of love and commitment

Play this song while you read.

Last week, while on vacation, I happened upon TCM’s fan-picks. After running some form of a contest, a number of lucky classic film fans got the chance to introduce a movie they admire on national television. Some of the picks were obscure, others a little more obvious, yet welcomed. One of them was Fellini’s early masterpiece “Nights of Cabiria.” Well, it’s not really an “early” film, since he had been directing since 1950, but more so the final film before his highly influential run of 60s classics (“La Dolce Vita,” “8 1/2,” “Juliet of the Spirits).

The guest presenter, a bearded writer from Brooklyn, mentioned its unfamiliarity amongst modern American audiences, despite the film winning an Oscar for best Foreign Film (1957). It seems, to me at least, that most people venture only as far back as “La Dolce Vita,” which is terribly sad, considering the brilliance in all his films. 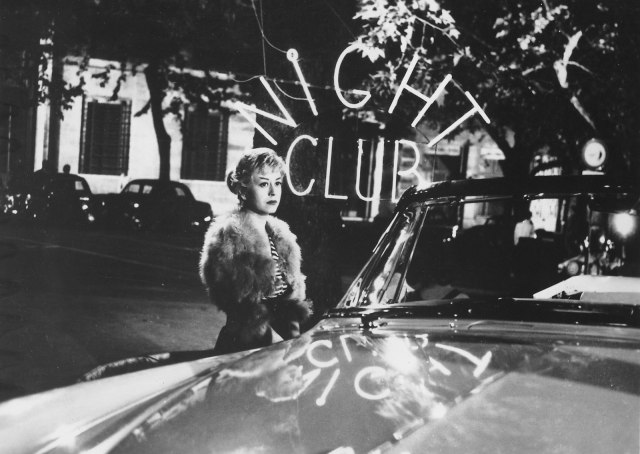 Anyways, “Nights of Cabiria” is similar to his earlier, female protagonist focused “La Strada” (1954) in its sense of tragedy and the audacity of the human spirit. How it differs is its comedic approach to Cabiria’s suffering. As the guest presenter put it, “I could only watch “La Strada” once – it was just too sad. “Nights of Cabiria” is sad too, but it also has a great sense of playfulness and humor.”

Maria ‘Cabiria’ Ceccarelli’s personality (brought to life by one of my favorite actresses Giulietta Masina) is as layered as her second-hand evening wear. From the boldness of her striped blouse, to the sexuality of her loud fur-coat, Cabiria puts herself on display with hopes of attracting any kind of love. It’s an intrepid, romantic move to live in such a way, which why the film is so tragic.

Only Fellini could tell a story so personal and poignant in a playful way. You feel, as an audience, as though you’re watching a dream- is it your own, or is it Cabiria’s? In the later case, is it more of a nightmare? It’s always difficult to tell with Fellini, which is why it’s best to experience it as an opportunity to see  what the great Italian director sees when he closes his eyes and his subconscious yells, “action!”

Why you should watch:

– The best actors and actresses can say more with their face than with their voice. That being said, Giulietta Masina is, simply put, fantastic. You could cover the rest of the frame leaving only her face and still cry, laugh, and love as a result of her performance.

– Nino Rota is one of my favorite composers. For “Nights,” he manages to capture the cool, ultra-stylish essence of late-50s Rome, while maintaining a certain level of detachment and longing.  Listen to it here.

– It’s a film about a lonely, isolated person, to whom life teaches its most important lesson: “it goes on.”

– The club bit, with its tribal drums and mysterious patrons, is one of Fellini’s most intelligently constructed scenes.

Sadly, this film is not streaming on Netflix, but it’s worth adding to the old DVD Que. If you really want to make me happy, you’ll ride your bike to the local library and pick it up from there. Trust me, it’s the best way to watch movies.

I’m going to try and be more consistent with these suggestions. In the mean time, I’ll start tweeting the films I’ve recently watched and enjoyed – that’s a plug to follow me.

One last thing: Watch this documentary on Nino Rota.