A lot Can be Said From a Struggle

Record breaking heat, farmers fighting frackers for whatever precious water is left, and carbon dioxide levels reach a dreaded apex. I guess April showers, or lack there of, really don’t bring May flowers. Okay, I’m being cynical. The flora is lovely and well here in Los Angeles – most likely the result of apathetic watering, despite our dangerous drought. Soon we’ll be asking the Great Lakes for some of its water.

“You have to, I mean, how else will we be able to fill the pools none of us seem to use? Do you realize how much water it takes to maintain our succulents? They require generous watering, just like I do after a Bikram yoga sesh.”

I’m done teasing L.A., for now at least, but the heat is actually quite relevant at the moment. Isn’t it strange how life seems to wax and wane with our own emotions and narratives? Let me explain, I’ve been having one of those mid-mid-mid life crisis (I plan on living to be 120), and the world knows it. This week has been particularly trying, and it seems the temperature continues to rise along with my frustrations. On top of all my personal anxieties, the World Health Organization decides to announce we’re heading for a post-antibiotic age. Don’t they know I’m having a bad week? Now I have to worry about a sinus infection killing me, in addition to climate change and my ambiguous career path.

Hang with me, I’m entitled to a proper venting. I worry, complain, and get angry about things just like everyone else, but not for more than a day or two. My problems are minuscule compared to say an Eritrean refugee being kidnapped on his way to an uninviting, yet free European country. I know this. Yet, I need weeks like this so I can figure out where I must improve. It’s a stress test, I guess.

Why do I bring all this up on my travel post? Because it’s been seven damn months since I left and I need an evaluation. My time in L.A. has been more than worth it. I love it here; the weather, canyons, and competitiveness have made me a healthier, stronger person. The way I see it, thanks to my Dad telling me to see it this way, my first year has been the equivalent of a masters program. Actually, I doubt I would’ve learned as much about writing, marketing, and the film industry if I had decided to pursue an advanced degree. I guess the best way to learn a trade is to throw yourself into it.

Lately, for reasons most likely induced by my stress, I’ve been revisiting my time on the road. Just yesterday, while stuck in traffic on the 405 – a redundancy I’ll never get used to – the song “Get Your Kicks on Route 66” came on K-Jazz. It’s a silly song, yet the part where the singer lists off all the particular cities encountered on the old road gave me flashbacks. I responded to each location with an affirmative, “yep, I got my kicks off there” nod, well, except for Amarillo; no nod was given for Amarillo. This memory trip gave me the motivation to sit down and write the next chapter. As for my problems, I feel Donald Fagen puts it best,

“Any major dude with half a heart surely will tell you, my friend. Any minor world that breaks apart falls together again.”

I’m a day behind, or is it two? Time seems to blur together when you’re on the road. To be honest, my notebook fell into the great abyss that is my belongings, and I’ve been too lazy to reach back and find it.

I encountered my neurotic self around 10:00 P.M. in a hotel bedroom somewhere west of Joplin. To be honest, I’ve been sleeping well, so it was inevitable that I would have an insomnia ridden night sooner or later. It was a particularity bad episode, since the anxiety of  being so far from home in a strange place mixed with my other worries. This insomnia is really immature of me; I hope to leave it behind with the wet towels and empty cup wrappers of that Hampton Inn.

Infinitely more interesting than Amarillo, New Mexico is a state full of anachronisms, history, and turquoise. We ventured off the interstate to drive down what used to be the main drag of the forgotten Route 66. It’s a lot like driving onto an old studio lot, you can’t help but think, “so this is how it used to be?”

Glorious neon signs line the road, standing monument to the fact they’re no longer clever branding, but fading relics. It’s surprising just how far down the route you can see. The street lines cut through the point of perspective giving the road a vortex effect; it’s as if the road were pulling you through a strange trip through time.  Most things are painted an offensive looking red and yellow, like those cheap plastic ketchup and mustard dispensers you find at Coney Island. That being said, I love it. I love the streams of economical, colored flags straight out of a used-car lot, the “weird is good for business” sensibility, and the lack of healthy grass. Route 66 is real.

What a bizarre concept: a building shaped like a tepee that sells an eclectic mix of nonsense to people who only stop to take a picture under its impressive sign. 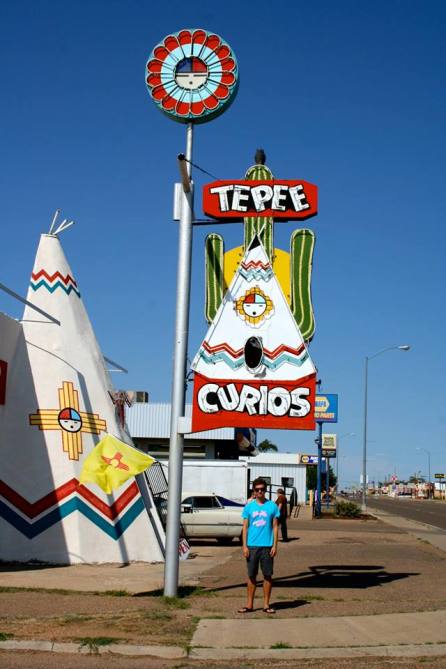 I guess Lee and I are tepee curious because here I am standing under the sign. It’s a miracle it didn’t fall on my flip-flopin’ ass. Below is a picture of what you should expect to find inside Tepee Curious, since it’s an actual picture of the inside of Tepee Curious. 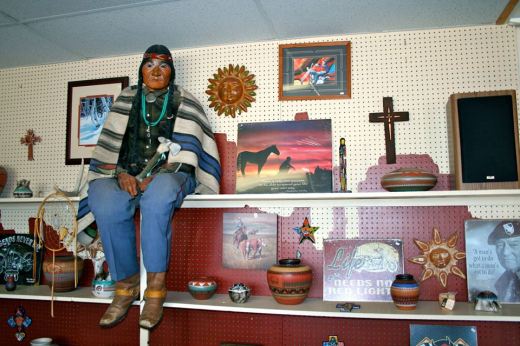 Is it ironic? I’m not sure, the mix of Christian iconography and John Wayne, circa Green Berets, makes me hope so. Let’s be honest, if you can’t find what you’re looking for here, then you’re out of luck.

– Two photos of John Wayne. One black & white; one intimate

– One new pair of slacks for Lee

Next, we sauntered across the road to a motel with an old Cadillac sitting comfortably in the shade of the front office’s covered driveway. The motel’s exterior is textured and painted to resemble an adobe. The red, white, and blue steel yard-chairs are a charming touch. Further, to add to the hotel’s retro vibe, some walls are covered in large, faded murals of American icons – James Dean, Marilyn Monroe, Lee & Jay.

There’s a great vulnerability about this place. A land with billions of years of natural history outfitted with the worn-out narrative of “Americana” only a fraction of its time. It’s both sad and beautiful. I can’t think of any other way to describe it.

I expected to discover many things on this trip, but, to be honest, a dog capable of melting my cold, cat-loving heart was not one of them. After a short drive, we pulled into a shop suffocating in its own dilapidated junk. Cow skulls, rusty traps, oil signs, and a mix of thorny weeds. In other words, this is the kind of place every b-horror movie set-director has been trying to recreate for the last twenty years. At first, the owner just ignored us and went on working under the hood of a car. I expected him to slowly walk over and say,

“You boys shouldn’t go up to that old mill house. Lots of strange things have been happening there. Just the other day, a group of college kids went and never came back!”

To our benefit, he wasn’t the archetypal soothsaying shop owner I feared he would be. After informing us the store was closed, he gave prompt instructions on how to play with Misty, his black and brown border collie. The rules were simple enough: pick up her floppy Frisbee, tinted deep blue by a thorough layer of slobber, and throw.

Misty was calm and collected, despite her apparent excitement. Her David Bowie eyes, one blue and one brown, smartly calculated the exact time and place the Frisbee would land. Dogs know a lot more about physics than we give them credit for. 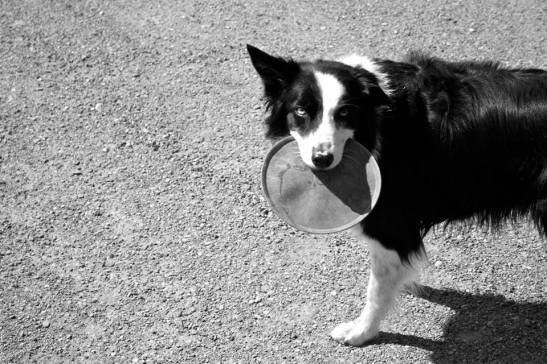 Misty is a good dog. She doesn’t bark, and her left ear hangs back over her head. Los Angeles dogs could learn a lot from Misty.

As expected, Lee struck up a conversation with the grease covered owner. He was quiet, yet, like everyone else I’ve met thus far, generally interested in our road-trip. Simply put, some people are just kind.

I shook his callus-covered hand and went on with my life; a life that would be drastically different from his. I’m grateful to have met the two.

Stay tuned for part six to find out why you should wear sunscreen at the Grand Canyon, and why Mitt Romney needs to update his motel. I know he can afford it. 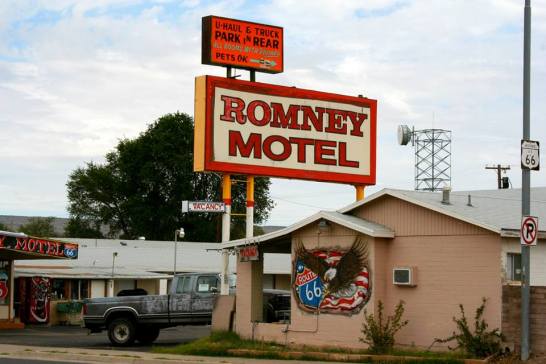 All photos were taken by me, which may or not mean anything.

My name is Jay Jasinski and I'm a freelance social media and content marketer based in Los Angeles, California. I'm also a writer with an interest in film, literature, and the environment.
View all posts by jayjasinski10 →
This entry was posted in Travel, Uncategorized and tagged America, Detroit, joplin, los angeles, new mexico, nostalgia, notebook, route 66, travel, travelouge, USA, World Health Organization. Bookmark the permalink.